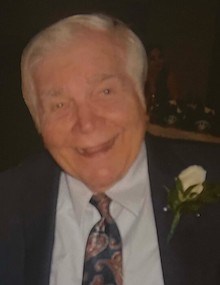 Bill was born at home in Lisbon on Dec. 30, 1930, the son of Peter W. and Hilda Johnson Salmen Blackburn and Ed Blackburn.

He graduated from Salem High School in 1948

Bill married Nora Guiler on June 4, 1955 at the First Baptist Church in Salem; they celebrated a 66th anniversary this year.

He was the owner of Arrowhead Kellering, Inc. and the Sport Shack in Columbiana.

Bill was a Boy Scout leader.

He was a life-time member of the Mahoning County Coin Club, Youngstown Numismatic Club and the Historical Society of Columbiana-Fairfield Township.

Bill was a 2001 recipient of the Columbiana Chamber of Commerce “Outstanding Community Service” award and the 2003 “Division of Wildlife” award given to one person in Ohio each year.

He was on the committee to move the Log House to the square and placed Heritage Markers on homes and businesses in Columbiana.

He was an instructor of the hunter safety course and was proud to have taught 875 students.

Wherever Bill went people remembered him from the “Sport Shack” where many hunting and fishing stories took place.

His hobbies included hunting, fishing and gardening. He was a collector of many things, a favorite being arrowheads.

Bill was a member of Greenford Christian Church.

Private services will be held for the immediate family and burial will take place at the Columbiana Firestone Cemetery. Seederly-Mong & Beck Funeral Home is handling arrangements.

The family requests donations be made in Bill’s name to the Leetonia Sportsman’s Charities, PO Box 143, Leetonia Ohio  44431 for the Iron Man project. This allows for the purchase of all-terrain wheelchairs for wounded veterans, which assists them with fishing, hunting and trailblazing.

Family and friends are invited to visit www.seederly-mongandbeck.com to sign the guestbook or send private condolences.

To send flowers to the family or plant a tree in memory of William A. Salmen, visit our floral store.