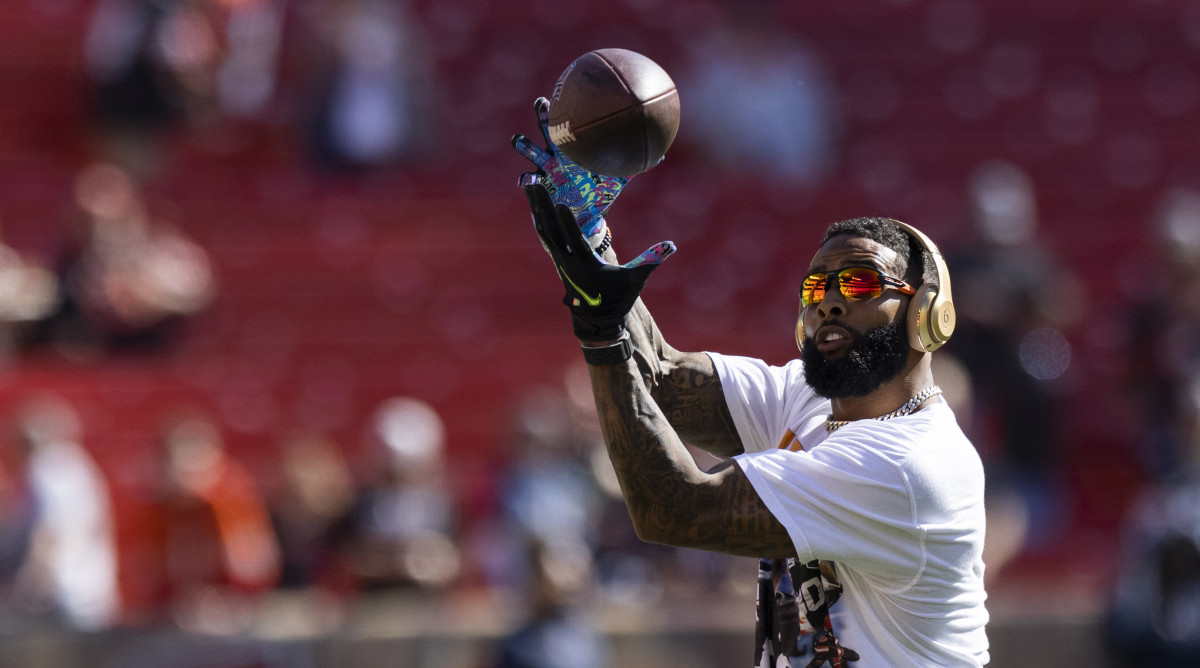 Once one of the most promising young playmakers in the NFL, Odell Beckham Jr. now finds himself unemployed.

Just days after the NFL trade deadline, the Browns released the 29-year-old wide receiver after trading for him three seasons ago. Beckham now lands on the NFL waiver wire, where teams (in reverse order of standings) can claim him over the next 24 hours. If no team claims him, he’ll become a free agent.

With just 17 catches for 232 yards and no touchdowns this season, from a fantasy standpoint, Beckham has been nothing more than a mediocre WR3. If you side with Beckham (and his father), his lack of production is due to the team’s play calling and Baker Mayfield’s inaccuracy. If you side with the Browns, Beckham’s numerous injuries this season, including his recovery from last year’s torn ACL have capped what the once dominant receiver is able to do on the field.

If he’s on your roster, hang onto him. He’ll land somewhere and his stats can’t really get much worse, so any potential landing spot should be seen as an upgrade considering how poorly his stats were in Cleveland.

Some ideal landing spots from a fantasy standpoint include the Ravens, Raiders, Chiefs, Packers, Rams, 49ers and Saints.

Baltimore is primed for a Super Bowl run, Lamar Jackson is playing spectacular and they could certainly use a receiver to go along with Mark Andrews and Marquise Brown. But that would mean OBJ goes from one run-first offense to another, which may not be to his liking.

The Chiefs offense has struggled lately and could use another dynamic pass catcher to help give the Patrick Mahomes-led offense a jolt. Tyreek Hill’s speed, Travis Kelce in short yardage, and Beckham somewhere in the middle would really help the Chiefs take advantage of the two-deep safety look most defenses have adopted when playing against Kansas City.

With OBJ out in Cleveland, what is the fantasy impact for the rest of the Browns’ offensive players?

The Rams just cut DeSean Jackson and are seemingly ALL-IN on winning the Super Bowl this season. They just traded for Von Miller and sacrificed most of their future draft picks with the Jalen Ramsey and Matthew Stafford trades.

Stafford already has two of the best receivers in Cooper Kupp and Robert Woods; adding OBJ to the mix would be one of the most dynamic triple threats the NFL has ever seen. Worth noting: The Rams tried trading for Beckham back in 2018 while the receiver was still a member of the Giants.

Aaron Rodgers has been very vocal about bringing in new talent at wide receiver throughout his career. If this is indeed the “Last Dance” for Rodgers in Green Bay, it would behoove the organization to sign a receiver of Beckham’s caliber. Outside of Davante Adams, Rodgers doesn’t have much in terms of weapons in his arsenal. At the very least, Beckham could take advantage of weaker defenders while Adams draws most of the attention.

Las Vegas just parted ways with Henry Ruggs III after the tragic traffic accident in Las Vegas. The Raiders might not sound like the sexiest name in the group, but Derek Carr is fifth in the league in passing yards (2,269) and yards per attempt (8.5). Compare that with Baker Mayfield’s 1,699 yards and it’s clear OBJ would find himself in an offense that airs it out.

There were rumors of the 49ers being interested in acquiring the eight-year veteran a few years ago while Beckham was being dangled on the trade market by the Giants. Obviously, that didn’t come to fruition, but San Francisco could still use a player like him in their offense. Problem is, like Baltimore, the 49ers run fewer passing plays than the Browns, which was part of Beckham’s frustrations in Cleveland. However, with Deebo Samuel the only healthy and productive playmaker in their passing attack, Kyle Shanahan might dial up more passes if he had a playmaker like OBJ on the roster.

Alvin Kamara leads the Saints with 28 receptions and Marquez Callaway leads New Orleans with 284 receiving yards. Not exactly the ideal situation for Sean Payton’s offense. After missing the first eight weeks of the season, Michael Thomas recently announced he’ll be out for the remainder of the year. New Orleans needs some help in their passing attack but they may be even more run heavy due to losing Jameis Winston for the year. Taysom Hill or Trevor Siemian are most certainly NOT an upgrade compared to Baker Mayfield, but of all the teams listed, New Orleans and Las Vegas are the only two spots where Beckham instantly becomes the top wide receiver on the depth chart.

It’s all speculative at this point. But if Beckham did land with one of the above teams, he’d go from a borderline WR3 to a consistent starter in your lineups as a WR2.