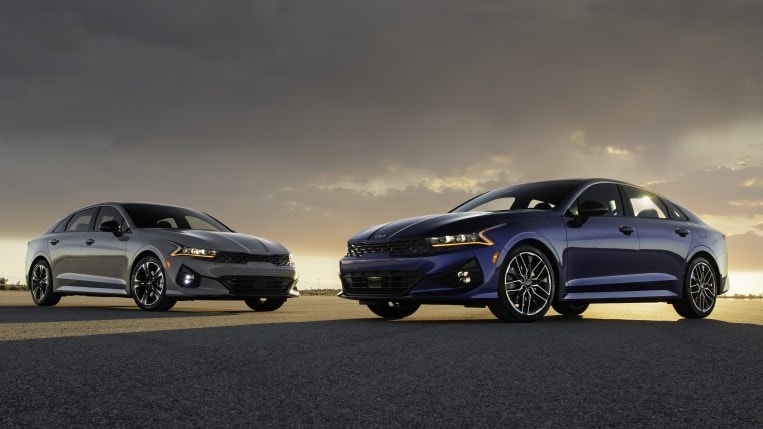 Kia’s midsize K5 sedan shines as one of the company’s most popular offerings. In fact, the Georgia-built K5 – which replaced the Optima nameplate – is Kia’s fourth-best-selling model, trailing only the Forte, Sportage, and Telluride.

On style alone, the handsome 5-seat K5 sedan is a winner. But it’s also offered in a wide variety of trims, which helps it appeal to a wider audience. As such, the K5 lineup ranges from the economical LX mileage champ (38 mpg on the highway) to the seriously sporty K5 GT model with 290 horsepower and sport-tuned suspension.

The heart of the 2022 Kia K5 lineup, though, is comprised of these three models: the LXS, GT-Line, and EX models. Of these volume leaders, the GT-Line is by far the most popular.

Why? Let’s find out.

To begin, the K5 GT-Line is offered with front-wheel drive (FWD) or all-wheel drive (AWD). More important, the GT-Line hits that sweet spot with regard to content, looks, price, and driving manners.

At $26,190, the front-drive Kia K5 GT-Line costs only $2,400 more than an entry-level LX, yet it’s equipped significantly better. While it has the same 180-horsepower turbocharged 1.6-liter engine and 8-speed automatic transmission, the GT-Line sets itself apart with gloss-black 18-inch alloy wheels (vs 16s for the LX), LED fog lights and turn signals, sport bumpers, a gloss-black rear spoiler, a black headliner, a leather-wrapped steering wheel, and a 10.25-inch color navigation touchscreen in place of the standard 8-inch screen of the base K5.

What’s more, the Kia K5 GT-Line comes standard with cloth and leatherette seat trim (with GT-Line logos), a wireless smartphone charger, and a thorough version of the Drive Wise safety suite that we wish was standard equipment on the base LX. Yes, the base K5 does have a forward collision-avoidance system with automatic emergency braking, but the GT-Line builds on that with features such as blind-spot monitoring and rear cross-traffic collision avoidance.

When you get a Kia K5 GT-Line, you’re also able to order some notable options that aren’t available on the base LX. This includes all-wheel drive (a bargain at $1,600), a panoramic sunroof, LED reading lamps, heated front seats, red leatherette seat trim, and a heated steering wheel.

Optional safety upgrades on the 2022 Kia K5 GT-Line include navigation-based smart cruise control with stop-and-go, Kia’s semi-autonomous Highway Driving Assist, and an improved collision-avoidance system that will detect pedestrians and even apply the brakes if it senses you’re trying to turn left across the bow of oncoming traffic at a dangerous time.

Note: Many of the options mentioned above are grouped into a GT-Line Premium Package that includes the smart cruise control, the improved collision-avoidance system, and the panoramic sunroof. At $1,800, this Premium Package is another bargain.

Although the Kia K5 GT-Line has “GT” as part of its name, don’t confuse it with the 290-horsepower K5 GT, which has a sport-tuned suspension, a turbocharged 2.5-liter engine, and a paddle-shift 8-speed dual-clutch automatic transmission. The K5 GT-Line, in contrast, has the 180-horsepower turbo 1.6-liter 4-cylinder engine, which works with a conventional 8-speed automatic and is mounted in a chassis with standard suspension tuning.

And with the Kia K5, that’s totally fine. Aided in part by its wider 235/45R-18 tires, the K5 GT-Line artfully blends excellent ride comfort with sporting manners that come to the fore when this midsize Kia sedan is pushed hard on, say, a twisting mountain road. In that situation, and in everyday driving, the electric-assist steering has a natural feel, as do to the K5’s large disc brakes. All the controls, in fact, operate with an enviable precision, and the torque of the turbo 1.6-liter peaks at only 1,500 rpm.

Moreover, the GT-Line interior has a sporty vibe that’s not overdone. The ambiance is enhanced by a leather-wrapped flat-bottom steering wheel, a black headliner, and large analog gauges, plus an easy-to-use central touchscreen infotainment controller and a separate control panel below for the automatic climate control.

While the 5-seat K5 can accommodate four adults and a child comfortably, there are other popular midsize sedans with better backseat room. On the plus side, contours in the K5’s rear headliner help this Kia accommodate taller passengers, and the 60/40 split rear bench folds to accommodate large or awkwardly shaped cargo.

How would we equip our Kia K5 GT-Line?

The buying public has spoken: The GT-Line is the most popular Kia K5. It’s easy to see why. With its sporty good looks, available AWD, substantive options, and excellent safety suite, the Kia K5 GT-Line simply makes a lot of sense.

But how would we equip ours? Because AWD is only $1,600, we’d order it on our K5 GT-Line. We’d also get the $1,800 Premium Package, primarily for its navigation-based smart cruise control and its improved collision-avoidance system.

Thus equipped, our 2022 Kia K5 GT-Line totals $29,590 (before the destination charge of $1,025). That’s a lot of car for the money. And a reminder to us that a midsize sedan can thrive in this world full of crossover SUVs.