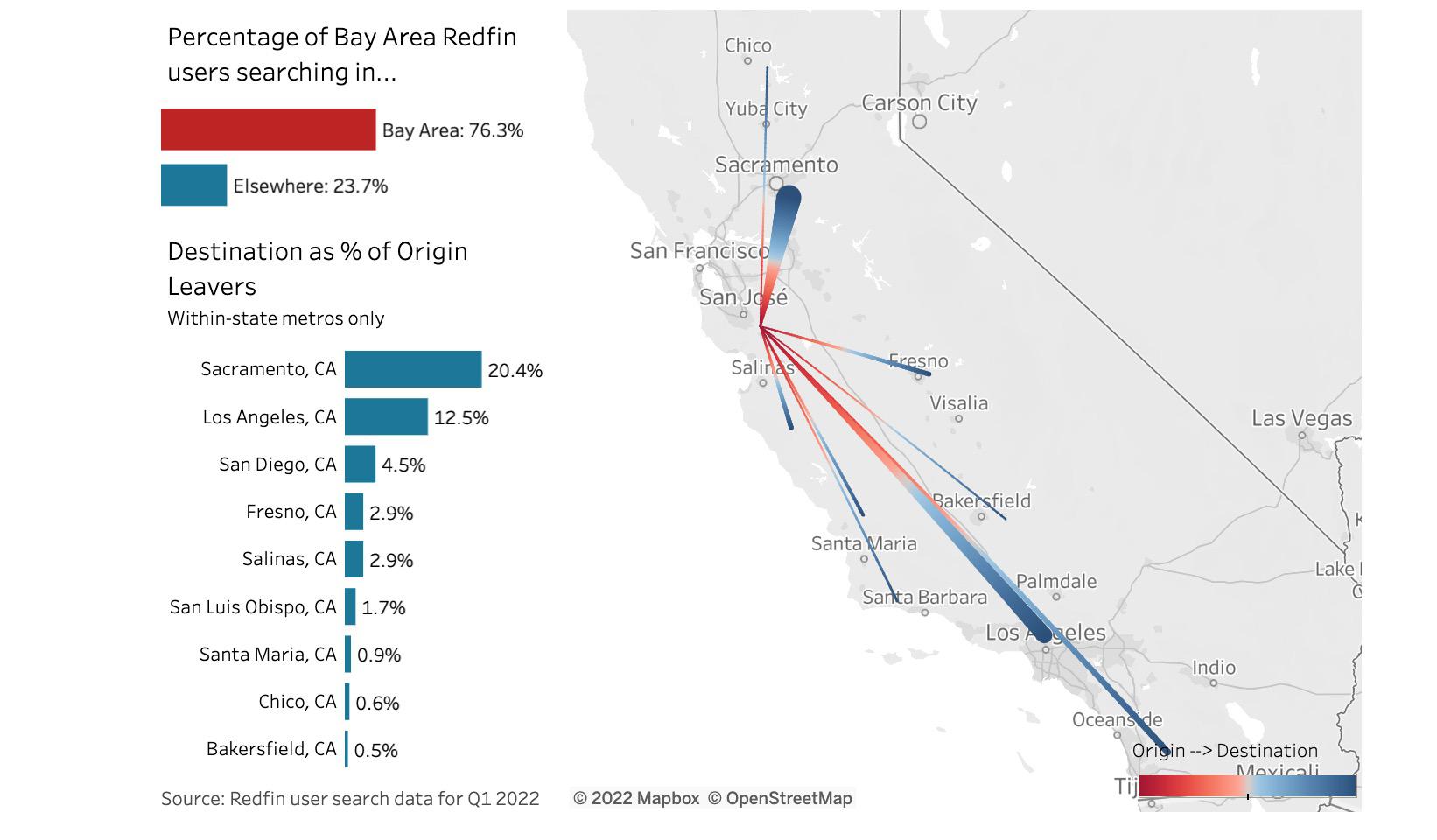 More than two years into the pandemic, the Bay Area and California continue to see an unprecedented population decline, with outmigration one of the major factors fueling the trend — but where exactly are Bay Area residents looking to move now?

According to this year’s latest migration data from Redfin, most Bay Area users of the real estate listings website have not been searching too far away from home. More than three-quarters of them — 76.3% — have been looking at homes for sale within the region. That mostly tracks with Chronicle analysis of U.S. Postal Service data from 2020 that showed 72% of address changes in the Bay Area were moves to other Bay Area counties.

For the Redfin users who were looking beyond the Bay Area, referred to as “origin leavers,” the biggest draws were other metropolitan areas within the state: Sacramento topped the list, at 20.4%, followed by Los Angeles at 12.5%. This also confirms a trend seen in USPS data from 2020, which showed that despite widespread migration, only a small fraction of Bay Area residents had left the state.

The Redfin data looks at search history on the site for the first quarter of 2022 for the San Jose metro area, which Redfin defines as including San Jose, San Francisco and Oakland.

The numbers for Sacramento make sense, Redfin deputy chief economist Taylor Marr said: California’s capital area offers more affordable homes, but people who move there can “keep ties to the Bay Area” and “come in once a month for meetings” if needed.

The third-most-searched destination outside the Bay Area was Seattle at 5%. Washington’s most populous city has seen the “ripple effects” of people from the Bay Area moving there, Marr said: Local residents have been “priced out at record levels.”

Meanwhile, Seattle looks the way the Bay Area did about eight years ago, he said.

The Bay Area “saw most inbound migration back in 2014,” when many people, both domestically and internationally, were moving here for tech jobs, Marr said. The tide began turning in 2015, he said, as cities including Seattle, Denver, Austin and Portland became more attractive for tech workers.

Outmigration has since accelerated, while the number of people moving to California has decreased, Marr said.

The pandemic and federal policies accelerated those trends, as reflected in California Department of Finance population estimates based on U.S. census data released early this month.

While foreign immigration typically has offset population losses from people leaving California, the number of immigrants coming here has dropped due to the pandemic and federal policies, The Chronicle reported this month. The data showed a net gain of 43,300 last year, compared with an average of 140,000 before COVID.

Meanwhile, state officials said, birth rates have slowed while the aging of the Baby Boomer generation has accelerated the death rate, accompanied by a surge in deaths from COVID-19 — all contributing to California’s population decline to 39,185,605 from a peak of 39,538,223 in early 2020. The state’s population last grew by about 0.2%, or 87,494 people, in 2019, according to census data.

The Bay Area’s sky-high home prices, however, have remained seemingly impervious to the changes. Even with mortgage rates going up, home buying remains competitive. While rents dropped in parts of the Bay Area during the pandemic, they remained among the highest in the nation and have rebounded in major cities, including San Francisco.

Rising inflation is making an area already notorious for its high cost of living even more unaffordable. And a recent report declared the San Francisco and San Jose housing markets among the world’s most unaffordable.

But even so, a Redfin analysis of U.S. migration hot spots combining migration and inflation data in the first quarter of 2022 shows that while Phoenix is the second-most-popular place for home buyers to move, it has the highest inflation rate of 10.9% of metros included in the analysis. San Francisco, on the other hand, was the metro where the most people left, and had an inflation rate half that of Phoenix at 5.2%.

“A homebuyer would still save a lot of money by moving from San Francisco to Phoenix if they kept the same job and the same salary,” Marr said in the analysis, but noted that the discount is less than it was two years ago and many people are doing the same thing as prices for housing, goods and services continues to go up in these more “affordable” areas.

“There may come a point where it won’t make financial sense to move from coastal California to Phoenix or Atlanta,” he said — though that point is likely still years away, since popular migration destinations are adding more new homes than other places in the U.S.

Within California, San Diego was the third-most-searched metro area for Bay Area users looking outside the region, at 4.5%. The San Diego area has become one of California’s hottest housing markets in the past few years, with home values rising and inventory decreasing.

San Diego was followed by Fresno and Salinas, each with 2.9% of the Bay Area Redfin user share of searches outside their region. California’s Central Valley was a hot real estate market at the height of the pandemic as Bay Area residents were attracted to more space and affordable housing there.