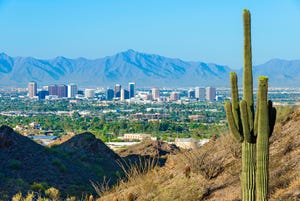 Surging housing prices, poor air quality and other big city woes have turned metro Phoenix into one of the nation’s worst destinations for retirees, according to a new report.

The Valley of the Sun was renowned as a retirement haven. But among the 150 most populous U.S. metro areas, Phoenix now ranks 140th, just 10 spots from the bottom and ahead of only Albuquerque, New Mexico; San Juan, Puerto Rico; and eight cities in northern and central California. San Juan finished last.

The annual study by U.S. News & World Report overwhelmingly favored cities in Florida and, to a lesser extent, Pennsylvania and the eastern U.S. Those in the West and, especially, Southwest, scored poorly. Eugene, Oregon, in 33rd place, was the top-ranked city west of the Mississippi River.

San Juan’s last-place ranking meant that it replaced Stockton, California, at the bottom.

The rankings for most cities were fairly stable, but Phoenix plunged from 59th place in last year’s report to 140th this year. That eclipsed even Tucson’s slide from 87th to 116th place. Those were the only two Arizona metro areas analyzed.

The U.S. News report was based on survey responses from more than 3,000 people 45 and older from around the country. It weighted responses in six broad areas: happiness (22.3% of overall scores), housing affordability (20.2%), health care quality (19.1%), retiree taxes (15.5%), desirability (13.6%) and job market (9.3%). The happiness category includes crime rates and air quality, both of which were added this year.

“We did see continuing high interest in retirement in Arizona, especially in both Phoenix and Tucson,” said Emily Brandon, senior editor for retirement at U.S. News. However, both cities had low air-quality ratings, she added.

Eroding housing affordability was a big culprit that contributed to the massive retirement slide for the Arizona metro areas, especially Phoenix.

“We’ve seen very large increases in median home prices in 2021,” noted George Hammond, an economist at the University of Arizona in Tucson. “These have far outpaced income gains, even with the huge amount of federal income support flowing into the state during 2020 and 2021.”

Retirees who own their homes free and clear, as many do, wouldn’t be hurt as much as those who rent or are looking to buy. Retirees on fixed incomes would feel the impact more noticeably than workers who can seek out higher income from raises or new jobs.

But Chris Camacho, president and CEO of the Greater Phoenix Economic Council, noted that housing prices are rising in other cities too and people continue to flock to the Valley despite the increases here.

“Greater Phoenix’s quality of life, cost, competitive taxes, housing options and cultural and recreational amenities remain highly desirable, as seen in the growth the region has experienced,” he said in a statement.

Pollution and other problems

Among other dubious distinctions, metro Phoenix now ranks among the nation’s 10 most polluted metro areas for both ozone and year-round air particles.

However, Arizona ranks as one of the more tax-friendly states for retirees, according to researcher Kiplinger, with reasonably low income- and property-tax rates and exemptions for several types of pension income. Arizona, like most states, doesn’t tax Social Security retirement benefits, either. A lack of state income taxes clearly helped the Florida cities.

Tucson and, especially, metro Phoenix have boomed from strong employment gains lately, but that didn’t help the Arizona cities much in the retirement study, as jobs were a relatively modest factor.

In last year’s report, metro Phoenix received an overall score of 6.8, with higher grades given for net migration, desirability and jobs, and a low grade for quality of life. This year, Phoenix received a grade of 6.0 on the 10-point scale, with health care representing another area of weakness.

This year’s report can be seen at https://realestate.usnews.com/places/rankings/best-places-to-retire.

Reach the reporter at [email protected].