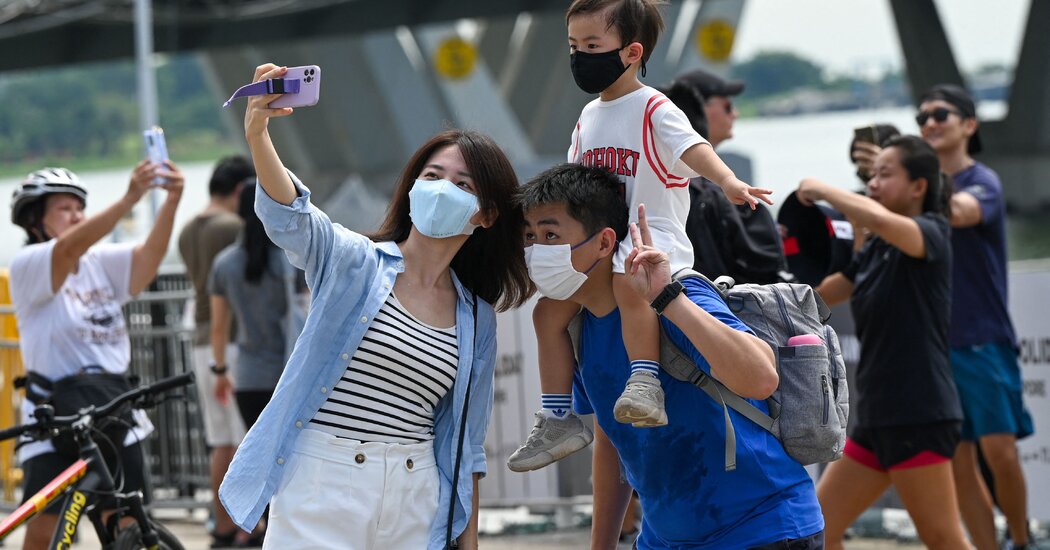 As Asian countries are learning to live with the coronavirus — with the notable exception of China — and gaining momentum in their vaccination campaigns, several are cautiously reopening their borders and welcoming travelers.

Although the Asia-Pacific region initially lagged in vaccinations and many countries remained committed to some of the world’s toughest restrictions for much of the year, the region’s vaccination rates have been catching up.

Yet while some Asian nations vaccinated the majority of their populations months ago, they are only now reopening to international travel — just before the winter holidays.

Singapore, after more than 20 months of tight border restrictions, began loosening its international travel regulations last month. The city-state has fully vaccinated nearly 92 percent of its population, the highest rate in the world, according to Our World in Data.

On Monday, Singapore said it would allow back in travelers from five more countries, including India and Indonesia, starting later in the month.

“Within Southeast Asia, the pandemic situation is fast stabilizing,” said Ong Ye King, Singapore’s health minister, at a news conference this month. “This gives us scope to start opening up our borders with regional countries, as well.”

Singapore and South Korea also opened a reciprocal travel bubble on Monday. South Korea has been easing travel regulations, first for Koreans and now for foreigners.

Although new case numbers have recently reached a record in South Korea, it plans to continue its “live with Covid” strategy. The country has fully vaccinated 78 percent of its population, according to the government.

In Cambodia, which is reporting one of the world’s highest vaccination rates, fully vaccinated travelers no longer have to quarantine starting this week. While the government says the country has fully vaccinated 88 percent of its people, based on a population of 16 million, a New York Times database puts the rate at 80 percent, based on a population of nearly 16.5 million. Cambodia has also started administering booster shots and inoculating young children.

Even some Asian countries with lower vaccination rates have reopened their borders or plan to do so soon.

In the Philippines, where only 31 percent of people have been fully vaccinated, the Tourism Ministry said on Friday that it had approved opening to fully immunized travelers from certain countries “in principle.” A final decision will be made by the government’s Covid task force.

In Myanmar, the military government said it planned to reopen land crossings with China and Thailand next month. It also said it would allow international flights early next year if coronavirus cases continued to decline and if enough people were vaccinated.

Myanmar’s health care system has been in disarray since the military’s Feb. 1 coup, and the country has lagged behind the rest of Southeast Asia in vaccinations. The country of 54 million faced a surge in cases and deaths in July, but the daily numbers have since declined.

Understanding the Chaos in Myanmar

The coup was preceded by a contested election. In the Nov. 8 election, Ms. Aung San Suu Kyi’s party won 83 percent of the body’s available seats. The military, whose proxy party suffered a crushing defeat, refused to accept the results of the vote.

Ms. Aung San Suu Kyi could face time in prison. She was detained by the junta and secretly put on trial. If convicted of all 11 charges against her, which include “inciting public unrest,” she could be sentenced to a maximum of 102 years in prison.

Vietnam, which has fully vaccinated 39 percent of its population, recorded a 46 percent increase in daily cases over the past two weeks, according to a New York Times database. Starting this month, international visitors are being allowed to visit tourist destinations, including the resort island of Phu Quoc and Quang Nam Province.

The government hopes to open the rest of the country to international travelers next year.

“Along with other economic sectors, the tourism industry should take steps to restart safely,” Deputy Prime Minister Vu Duc Dam said last month at a tourism meeting with other government officials.

India reopened its borders to most international travelers this week after 20 months of restricted travel. The country has fully vaccinated just 29 percent of its population and plans to open travel bubbles with 99 countries.

Indonesia and Thailand have allowed visitors from certain countries since October. Indonesia has fully vaccinated 33 percent of its population, while Thailand has inoculated 54 percent.