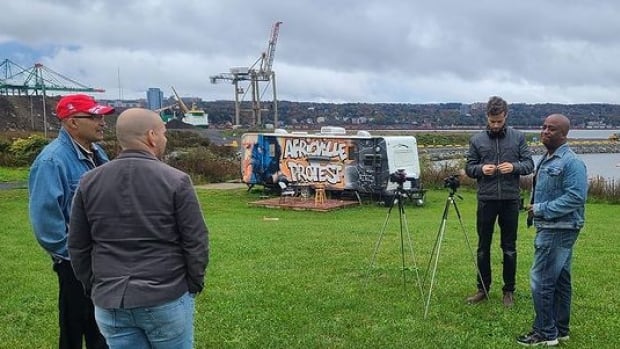 Lifelong friends are travelling across Canada to highlight the work of Black activists and educators for their upcoming documentary, Beyond the March.

Mark Holmes, who is Black, and Matt Cappuccitti, who is white, have been friends for about 40 years. They grew up on the same street in Mississauga, Ont., and now live in Toronto.

Holmes and Cappuccitti said they were inspired to talk to Black activists after George Floyd, an unarmed Black man, was murdered by a white police officer in Minneapolis in May 2020.

“I said to Matt, ‘I’m Black and I don’t know what the Black community is doing for the fight against anti-Black racism,'” Holmes, who has a background in journalism and film, told CBC Radio’s Information Morning on Tuesday.

“So we thought it’d be a really interesting journey to go down that road and see what the Black community is doing.”

Cappuccitti was immediately on board. He said he felt “a great guilt” after the death of Floyd and that made him want to confront his privilege as a white man.

“I haven’t opened my eyes to the issues in our country and that surround my friends … I haven’t done anything. I feel bad about that. I need to learn,” he said.

“[So] how can we get involved? How can we do something so that we can push the narrative for other people, Black or white, who might be in the same situation so that they can help with this fight across Canada as well.”

That desire to help is why the friends decided to travel across Canada to ask Black activists “what happens after the protests are over?” and “what’s next for the Black community?”

Holmes and Cappuccitti started talking to activists in Ontario before travelling to British Columbia, and earlier this month, the filmmakers landed in Nova Scotia.

They spoke with several Black activists and journalists in Halifax, including Brian Daly, an assistant professor at the University of King’s College and former CBC journalist; Irvine Carvery, a longtime activist and former resident of Africville; and El Jones, a spoken-word poet and activist.

Holmes said they each brought something different to the conversation.

Daly talked about Black representation in the media — or the lack of it.

“Brian is doing his part to encourage more people of colour to enter journalism because we need people of colour on their TV screens and on the radio,” Holmes said. “We desperately need that.”

“[He’s] still fighting from a historical perspective to raise awareness about what has happened in the past and how we can fix it and how we can restore our communities,” Holmes said.

Longtime friends and filmmakers Mark Holmes and Matt Cappuccitti are travelling across the country, gathering stories of Black activism in the wake of the murder of George Floyd. 8:14

Jones talked about the importance of community.

“She brings that understanding that as a community, we are together. We stand together and that in itself gives us this fortitude to push on and persist.”

Cappuccitti said this is what people need to hear to understand anti-Black racism and what people can do to stop it. He said he wants the documentary to help others, the way it has helped him learn.

Holmes said he has also learned a great deal, even as a Black man.

“I’ve felt that in my life, I haven’t perhaps spoken up enough when acts of anti-Black racism occurred to me and so here I am, a middle-aged man, and I thought, ‘Well, I’ve got to do something because you haven’t done too much in the past and it’s time to get involved now.'”

Cappuccitti said he’s proud of Holmes for sharing his lived experience and becoming an activist in his own right.

“It’s a wonderful thing to see, and I can’t wait to see what comes from all of his hard work and the inspiration that he’s going to bring to the next generation of filmmakers that comes after him,” he said.

Holmes said editing for Beyond the March will begin in January. He’s hoping to have the documentary ready for the festival circuit by spring.