Kids get limited COVID protection from world’s most popular vaccines 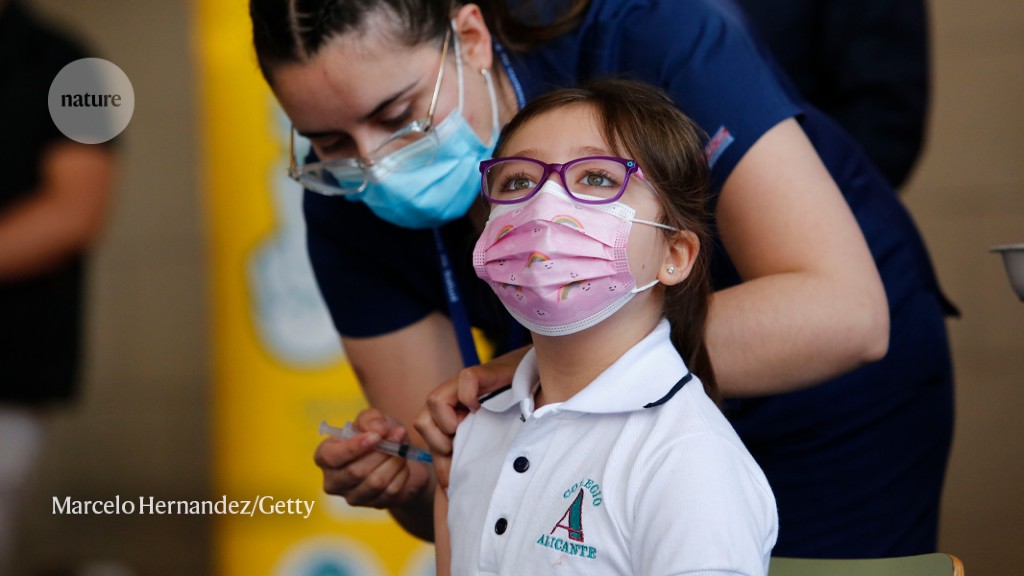 Three new studies offer a first look at how well some of the most widely used COVID-19 vaccines protect young children from the coronavirus1–3. The results — including data from toddlers as young as three years old — have prompted mixed responses among researchers about whether the vaccines should be recommended for use in kids.

The research examines two vaccines that were developed by Chinese scientists: CoronaVac, produced by Beijing-based company Sinovac, and a vaccine produced in Beijing by state-owned Sinopharm. The study results, from Argentina, Brazil and Chile, show that, in children, the vaccines provide little protection against SARS-CoV-2 infection and modest protection against symptomatic COVID-19. The studies also show that the vaccines are less effective against the now-dominant Omicron variant than the earlier Delta variant. The studies have not yet been peer reviewed.

The findings prompt some scientists to say that the two vaccines should be used to protect children, especially because inactivated-virus technology has a long safety record in common vaccines given to infants for polio and influenza. “It is important to vaccinate children to avoid severe cases,” says Enny Cruz, an epidemiologist at the London School of Hygiene & Tropical Medicine, who is a co-author of one of the studies3.

But others note that severe disease and death due to COVID-19 are rare in kids, and the vaccines do not offer impressive protection against SARS-CoV-2 infection or mild disease. Many kids, including in well-resourced settings such as the United States, have been infected at least once with the virus and have probably already acquired some immunity, says Shabir Madhi, a vaccinologist at the University of the Witwatersrand, South Africa. The vaccine data, he says, do not “support the case for universal vaccination of young children”.

The Sinovac and Sinopharm products are ‘inactivated’ vaccines, which rely on whole viruses that have been killed. They are among the world’s most widely used COVID-19 vaccines in adults: more than 5 billion doses of the vaccines have been given worldwide, according to health analytics firm Airfinity in London and the non-profit organization Our World in Data in Oxford, UK. That total includes many millions of doses given to children aged three and older in China, Chile, Brazil and elsewhere.

Recent data4 suggest that in adults 60 years and older, two doses of CoronaVac offer less protection against severe disease and death caused by Omicron than two doses of the messenger-RNA-based vaccine made by Pfizer–BioNTech, but three doses of either vaccine provided very high levels of protection. That research has not yet been peer reviewed.

An analysis1 posted online on 15 March assessed the effectiveness of CoronaVac in a population of 490,694 children aged three to five in Chile, between early December and late February, when Omicron was overtaking Delta. The inactivated vaccines were 38% effective at protecting children against symptomatic COVID-19 and 65% against hospitalization.

The results are the first for the effectiveness of COVID-19 vaccines in this age group. Study co-author Rafael Araos, a physician and epidemiologist at the University for Development in Santiago, says that children have a very low risk of ending up in hospital when infected, making it difficult to observe an effect of the vaccines. Given that obstacle, the vaccine’s performance is “pretty good”, Araos says.

A study2 from Argentina, posted on 19 April, observed similar results with Sinopharm’s vaccine in a cohort of 1.5 million children, which included a subset aged 3–11 who had received the vaccine. Two doses of the vaccine were 59% effective at preventing hospitalization during the Omicron wave in 2022 — a drop from 83% in the period from mid-December to mid-January, when both Delta and Omicron were circulating.

Finally, a study3 from Brazil, posted on 29 April, assessed data on close to 200,000 SARS-CoV-2 test results from children aged 6–11. The authors estimated that two doses of CoronaVac were 42% effective at protecting against COVID-19 in children, and 64% effective in protecting against hospitalization and deaths, between late January and mid-April.

Overall, the results show that the vaccines can’t suppress viral circulation, but they are effective against severe disease, says Cruz. But Madhi points out that the large number of unrecorded infections in children means the effectiveness estimates are probably not comparing vaccine-induced immunity with no immunity, but a ‘hybrid’ immunity — conferred by both vaccination and infection — with immunity from infection alone.

Madhi says he is concerned by the large number of kids that needs to be vaccinated “to prevent a single episode of hospitalization”. Unless the vaccines can prevent infection and mild disease, which account for 99% or more of cases in kids, it “would be a real stretch to justify this as a cost-effective strategy”.

“At the individual level — yes, vaccinating children is a good thing,” says Gagandeep Kang, a virologist at the Christian Medical College in Vellore, India. But more studies are needed on how long protection lasts and the breadth of the vaccines’ coverage against emerging variants, she says.

Franco Marsico, a statistician at the Calculus Institute of the University of Buenos Aires, and co-author of the Argentina study, plans to track waning protection. “This is one of our main concerns as we enter winter.”

Araos says the studies are another example of real-world assessments of effectiveness justifying public-health decisions after the fact. The big question, he says, for inactivated and other vaccine technologies is “whether to boost or not — and when”.