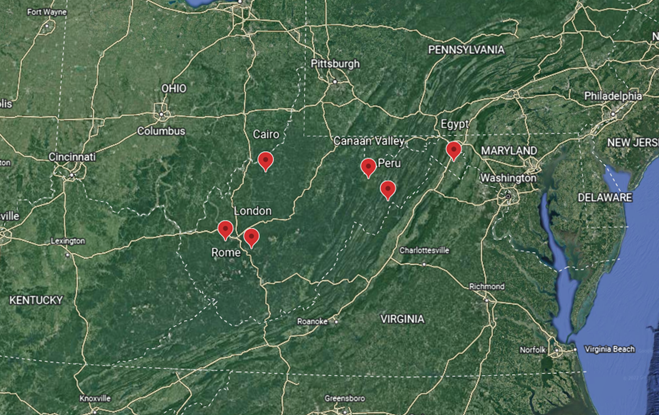 CLARKSBURG, W.Va. – It’s almost summer, which means that vacation season is here. With the price of traveling continuing to go up in 2022, staying in West Virginia is looking more and more appealing. But if you are set on visiting internationally, these West Virginia places might be the next best thing.

London, UK is a trade, travel and fashion leader in Europe. London, West Virginia is still along the river like its English counterpart, but not the Thames. Instead, you can find London along the Kanawha River in Kanawha County. Compared to London, UK’s population of nearly 9 million, London, West Virginia has a full population of 69 people. London is home to a Baptist Church, a Post Office and the London Lock and Dam.

While in Kanawha County, you could also visit the Italian namesake, Rome. The unincorporated place, Alum Creek, West Virginia was formerly known as Rome and is on edge of the Coal River in Kanawha and Lincoln counties. Back in the 1900s, the Chesapeake and Ohio Railroads were also built along the river and through Rome/Alum Creek. According to West Virginia Explorer, alum outcrops in a deposit in clay along the creek near the town are used for pickling and to tan hides.

Canaan Valley, West Virginia might be a better vacation destination than Rome or London. Canaan Valley in Tucker County is named after the land Canaan from the Bible, which is now Israel, the West Bank, Gaza, Jordan and portions of Syria and Lebanon in the Middle East. The two are pronounced slightly differently. Canaan Valley in West Virginia is known for its skiing and outdoor recreation and is among some of the most popular tourist spots in the state.

Things to do this summer in Canaan Valley

You won’t find the Great Pyramids in Egypt, West Virginia. Instead, you will find a one-street unincorporated town in Jefferson County. However, there was also a settlement known as Egypt in Summers County, West Virginia. Although it no longer goes by that name, a recent article from West Virginia Explorer suggests that the former Egypt might be more interesting historically than the current. Settlers discovered a stone fort and a series of ancient burial mounds at the site. The fort was destroyed by development in the 1900s, but its origin still remains a mystery, much like many of the burials in Egypt in Africa.

Named for Egypt’s capitol specifically, Cairo in Egypt has a population of more than 20 million people in its metro. By comparison, Cairo, West Virginia had 281 people in 2010 and is pronounced slightly differently. Once a booming from oil and gas, this Ritchie County town is home of the North Bend Rail Trail and its Bank of Cairo is among the National Register for Historic Places.

Cairo is also home to the Silver Run Tunnel which is thought to be haunted by a woman who was killed there.

Peru, West Virginia is an unincorporated town in Hardy County on the South Fork South Branch Potomac River. Like most West Virginia towns, it has a church and a general store. It shared very few characteristics with the South American rainforest country.