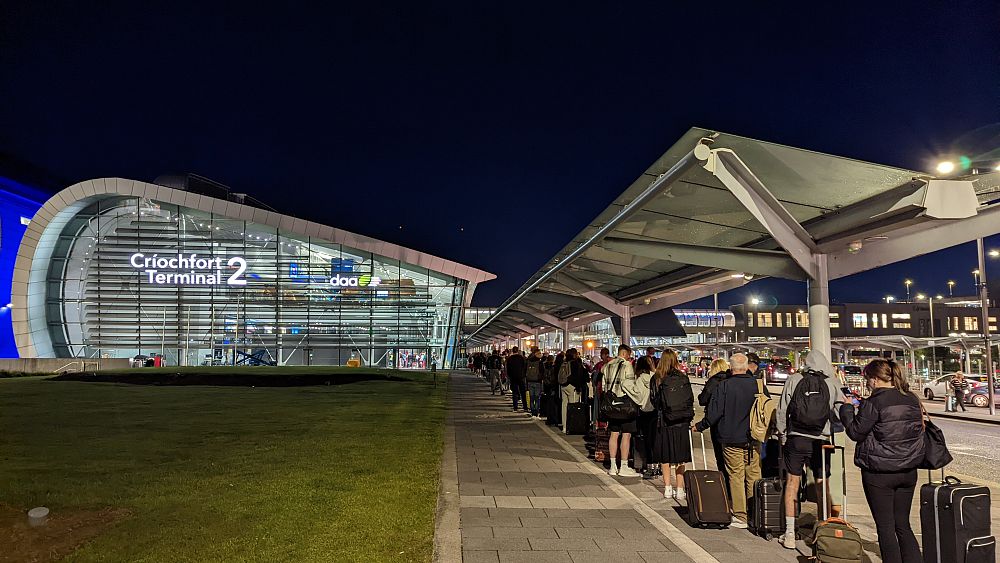 Dublin airport passengers face chaotic queues this morning, with the bag drop line winding outside the airport before the sun had even come up.

The queue stretches down the departure hall, through the airport doors, and alongside the building.

“[The bag drop queue] grew exponentially while we were in it. It was the hunger games out there,” one passenger warned.

The video follows a week of severe disruption for the airport. On Sunday, more than 1,000 passengers missed flights due to queues and a lack of airport staff.

What’s going on at Dublin airport?

As passenger numbers surge across Europe, Dublin airport has struggled to cope.

The chaos peaked on Sunday, when 50,000 travellers descended on the airport.

Early in the morning, the airport warned passengers that “significant queues” for check-in, bag drop, and security screening could cause them to miss their flights.

“Passengers queueing outside the terminal may not make their flight and may need to contact their airline to rebook,” a tweet from Dublin Airport read.

“We sincerely apologise for the obvious frustration and inconvenience this may cause.”

More than 1,000 travellers missed their flights while waiting in snaking lines.

Customers took to social media to label the queues a “disgrace,” “bedlam,” and “the worst we’ve ever seen.”

“I’ve been queuing for hours, definitely going to miss my flight, holidays ruined” one user tweeted.

Why are queues so bad at Dublin airport?

Dublin airport has been hit by staff shortages. About 1,000 airport workers have accepted voluntary redundancy since September 2020, at the height of the pandemic.

The reduced staff numbers have struggled to cope with the bounce-back in traveller numbers this summer.

On Monday, the airport’s chief executive Dalton Philips told Irish broadcaster RTÉ the airport was operating on “very fine margins”, and was “running to the max.”

The chaos means people have arrived very early for their flights – putting additional pressure on bag drop and security queues early in the morning.

In April, passengers flying on short-haul flights taking off after 08:30 local time were advised “not to arrive at the airport any earlier than 06:00”.

Faced with extreme wait times, many have disregarded this advice.

Will things get better at Dublin airport?

They instructed the DAA (Dublin’s airport operator) to return with solutions “to deliver an acceptable passenger experience,” and expressed “deep unhappiness” with the airport’s executive team.

“Like other airports all over Europe, we are currently working extremely hard to build back our operation after the collapse of international travel, including the recruitment, training and mandatory background checks required for all staff working at an international airport,” a spokesperson said.

The airport will have hired 370 officers by the start of July, Mr Cullinane pledged.

However, the process is expected to take several weeks, meaning delays are expected throughout June.

Watch the chaos in the video player above