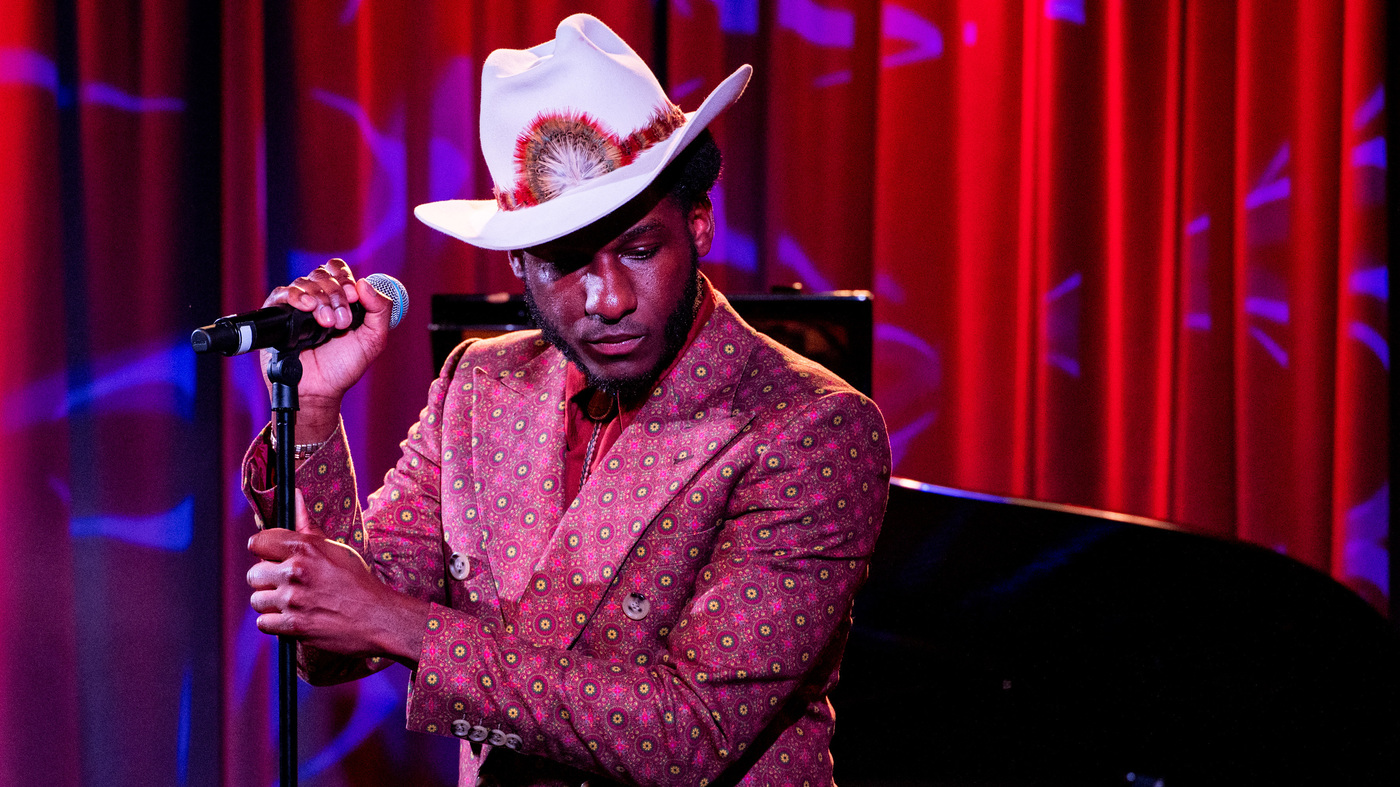 Leon Bridges’ “Motorbike” was one of public radio’s most-played songs of 2021.

Leon Bridges’ “Motorbike” was one of public radio’s most-played songs of 2021.

Each month, NPR Music asks music programmers, station hosts and producers across the country to pick the songs they can’t stop spinning. Now, as we look back on our favorite songs, albums and artists of 2021, we’re highlighting some of public radio’s most-loved songs of the year. Here they are, in alphabetical order.

All of this year’s picks are available to stream on the Heavy Rotation Spotify and Apple Music playlists at the bottom of the page. As always, you can discover fantastic music programming happening across the country in real time by clicking the links to each station’s website.

Bachelor, “Stay in the Car”

What started off as a little poem in a phone’s notes app turned into the sweet noise pop single, “Stay in the Car” by Bachelor. Comprised of Jay Som’s Melina Duterte and Palehound’s Ellen Kempner, the latter brought the idea of her mesmerizing experience in a grocery store parking lot to their collaboration. Singing in harmony, the pair’s fuzzy song builds with urgency, giving it a loveable Pixies vibe. —Alisha Sweeney, Colorado Public Radio, Indie 102.3

This sugary pastiche of Little Richard, Marvin Gaye, Pharrell Williams, Herbie Hancock and OutKast at its poppiest is what every wedding band on earth prays for: music every generation will dance to. If songs could make wishes, this one would beg to be paired with an overly choreographed end credits dance sequence in the sequel to Hitch the world deserves. – Matt Silver, WRTI

Memories and indecision look better viewed through the eyes of Robin Pecknold, lead singer of Fleet Foxes, a band that lives in a sepia-toned world. The collective project Big Red Machine embraces Pecknold into the fold with “Phoenix,” a lyrically repetitive meditation for deep contemplation while you watch sunlight hit the dust motes. –Jade, The Current

With “Motorbike,” the first track released from Gold-Diggers Sound, fans of Fort Worth’s Grammy-winning crooner and producer Leon Bridges not only witnessed his ongoing evolution as a consummate artist, but also his move into the role of sensualist and visionary. Coupled with Anderson .Paak’s spellbinding Bonnie and Clyde-inspired video, “Motorbike” celebrates the unalloyed joy of two hearts beating as one. —Gini Mascorro, KXT

The lead single from Brandi Carlile’s stunning 2021 album, “Right On Time” is a song fitting for the pandemic: a call for reconciliation that reminds us all that we lose each other in complacent silence. From the first listen, it quickly became part of the soundtrack to a year when empathy and understanding were more essential than ever. —David Safar, The Current

Cautious Clay, “Dying in the Subtlety”

Although he has songwriting credits on records by Taylor Swift and Billie Eilish, Joshua Karpeh (aka Cautious Clay) remains independent. On his self-released debut full-length, Deadpan Love, the Brooklyn-based musician doles out a smooth blend of indie-pop and R&B, anchored by the earworm “Dying in the Subtlety,” which boasts an infectious hook that delves into the inner workings of relationships. —Desire Moses, WNRN

Helado Negro’s “Gemini and Leo” is a disco-tinged track that Roberto Carlos Lange (aka Helado Negro) says is inspired by he and his partner’s astrological signs. Joyful synths and an infectious bassline set the vibe as Lange sings about new beginnings and “dancing on the floor all night.” —Brian Burns, WUNC

With a tip of his hat to the late John Prine, M.C. Taylor gives us a comforting entry in the best of 2021 with “Sanctuary.” The song seeks shelter in the storm that surrounds us — in the chaos of this year, could there be a more perfect song idea? —Chris Wienk, WMHT

This year Japanese Breakfast released a landmark album, a video game soundtrack, and a memoir that debuted on the New York Times best-seller list — now being made into a movie. And it all kicked off in March with this song. —Justin Barney, 88Nine Radio Milwaukee

“Witchoo” is a catchy, R&B funk track that’s sure to spice up your party playlist and maybe your love life. Drummer Aaron Frazer’s falsetto floats atop a breezy bass and keyboard groove, while lead Durand Jones and backing singers croon rhapsodic about hooking up and getting it on. —Rosemary Welsch, WYEP-Pittsburgh

Lake Street Dive’s latest pop gem may be a direct descendant of the Great American Songbook. Not only has the group crafted an incredibly danceable pop tune, but they’ve done so with the kind of deft rhythmic and melodic playfulness you might find from the likes of Gershwin and Kern. —Eric Teel, Jefferson Public Radio

Lord Huron, “Not Dead Yet”

When it was released in May 2021, “Not Dead Yet” by Lord Huron was the band’s first new song in three years. The band is best known for its dreamy, cinematic, indie-folk noir songs, and “Not Dead Yet” came out of the gate with uncharacteristic focus and infectious energy, a surprising and welcome change up to their sound. – Bruce Warren, XPN

If it’s catharsis you seek, Manchester Orchestra rises to the occasion. Guided by the absorbing vocals of Andy Hull, “Bed Head” is an urgent discourse on the paths one chooses in life, the stripping away of innocence and the purifying grace that can arise out of grief. —Michelle Bacon, 90.9 The Bridge, Kansas City

After much anticipation, The Marías released their debut album CINEMA in 2021. After one listen to “Hush,” you can’t help but immerse yourself in The Marías’ cinematic universe. Frontwoman María Zardoya is both teasing and sultry in her lyrical delivery, and the moody music sets the perfect scene. —Erika Bocanegra, KERA

The opening acoustic lick of Parker Millsap’s “The Real Thing” conjures an optimistic sunrise, and his sweeping falsetto reflects the kind of yearning for meaningful connections that many of us felt throughout the pandemic. As live-music returns, hopefully this tune will remind us to keep our gratitude levels high for the works of arts we love. —Adam Harris, WVPB’s Mountain Stage with Kathy Mattea

2021 was definitely a star-making year for Arlo Parks, whose talent shone through the challenges of being a rising artist during a pandemic. But songs like “Hope” gave listeners just that with its optimistic refrains of “you’re not alone” and “we all have scars.” It’s clear Arlo Parks has arrived. —Russ Borris, WFUV

Building pressure only to release it in a flood of music has been a songwriting technique for eons, but it’s never been better utilized than on this punchy, soulful jam. Rateliff and company have settled into this sound and made it their own, in the same way one slides into a perfectly tailored outfit. —Eric Teel, Jefferson Public Radio

Deep and rich, “Nightflyer” is a hypnotic entry from Allison Russell, who embodies both tensile strength and smoldering sensuality. The lyrics are mighty heavy, delivered in a siren’s seduction of a song that wraps beauty and danger around you with eyes wide open. —Jessie Scott, Roots Radio

Here’s a song more at home in a modern-art installation than jukeboxes. Surrendering to her retro impulses, Annie Clark’s deconstructive vision lashes together vaudeville piano, Eurythmics-inspired synthesizer, a desert-scene guitar lick, a menagerie of R&B-style vocals and caterwauling into a slinky episode of high art attitude. Not since Midnite Vultures-era Beck has a mainstream performer so thoroughly reveled in brash tackiness. —David Hyland, Wisconsin Public Radio

Sharon Van Etten and Angel Olson, “Like I Used To”

If I ever remember 2020 to 2021, I hope it feels like this song. The first reflection after years of averting my eyes from the memory rolodex will be painful — especially when forgotten names or places are revealed — but probably a healthy experience. It also helps when Sharon Van Etten and Angel Olsen are your reflection guide. —Ryan Wen, KUT

It’s rare for a new band to come out of nowhere and completely blow you away with their very first song, and Wet Leg did just that. “Chaise Longue” was a blast of fresh air the world needed after being cooped up for too long. An instant smash hit, “Chaise Longue” is insanely catchy and infectiously fun, and gives us something to look forward to. The group’s debut album drops in April 2022. —Kevin Cole, KEXP