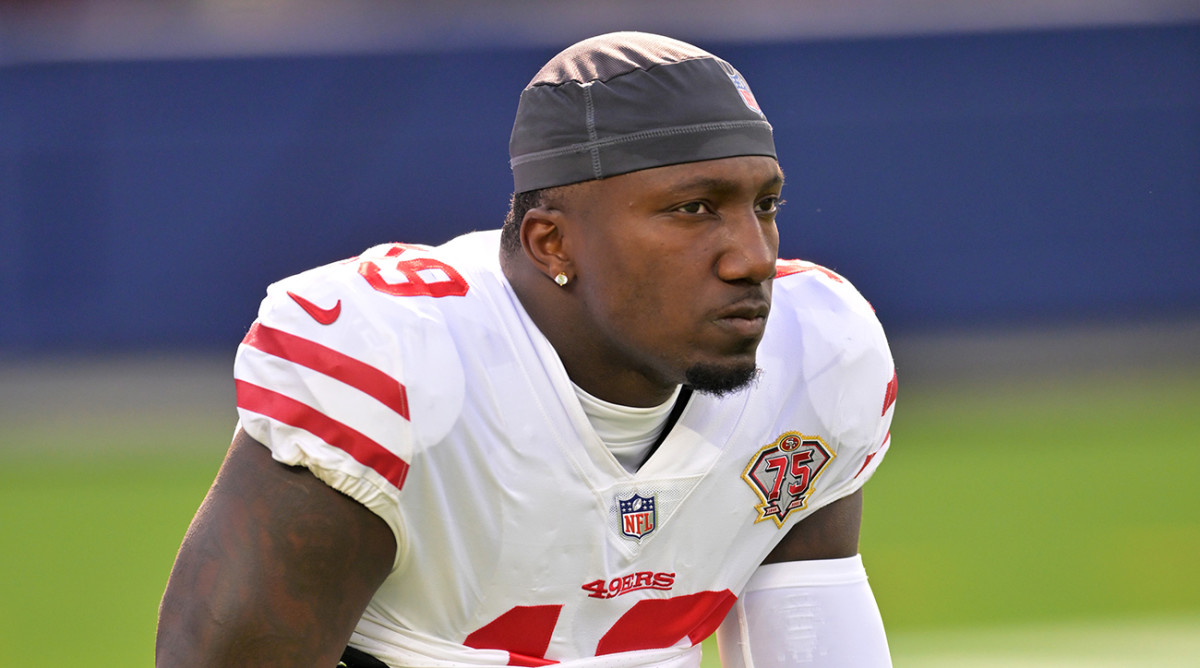 The byproduct of a Tyreek Hill and Davante Adams trade sweepstakes, both of which resulted in market-topping contracts that average (thanks to some creative accounting) $30 million and $28 million per year, respectively, was always going to be a long line outside of the GM’s office for those who have yet to be paid.

A.J. Brown is skipping voluntary offseason workouts and tweeting through it (never tweet through it). Deebo Samuel has, according to an ESPN report, requested a trade. Per multiple reports, the issue is not only money but usage. Presumably, Samuel may be concerned with being pigeonholed as a running back after carrying the ball 59 times in the regular season last year, and 27 times over three games in the playoffs. Samuel resurrected the 49ers rushing game, with head coach Kyle Shanahan parlaying Samuel’s adoration of contact and short-yardage quickness into an every-down weapon.

Understandably, Samuel could—and should—be concerned about how that usage affects his viability to earn generational money as a wide receiver. Personnel executives could begin to see Samuel as a running back, nudging him into a salary classification that almost never receives long-term deals, as opposed to a wide receiver position that is smashing records by the moment.

Samuel justifiably should not take the field until he has a long-term contract commensurate with the top of the receiver market. It seems, for the moment, he is seeking that elsewhere.

A few years ago—hell, a few months ago —we may have taken this tidbit of information with a grain of salt. Trade requests were simply part of the theatrics of negotiating and almost never resulted in an actual trade. The landscape has forever changed, and there is absolutely a chance we see Samuel in a different uniform next year.

With that in mind, we wonder: where will Samuel go? Where should he go? Let’s put our GM caps on and shop around…

This one was obvious enough that I felt the need to pause the taping of our podcast, The MMQB Podcast, just so I could tweet it. The Jets are loaded with draft capital. They have two top-10 picks, picks No. 35 and 38 and additional fourth-round selections as well. They also already swung and missed on a wide receiver trade (the Jets were a finalist for Hill). Samuel would find almost an identical playbook in Florham Park, given that most of the Jets’ staff comes from San Francisco. They also have glaring needs at both receiver and running back and money to throw around with Zach Wilson on his rookie deal.

While I’m not sure of the validity of reports that the Jets are having a difficult time landing free agents, trading for players and providing contract assurances on the back end is a way to jump ahead of the market. Samuel would be the biggest star the market has seen since Odell Beckham Jr., and would have ample opportunities to enlarge his brand locally. While there would probably be some hesitation in playing with Zach Wilson, or any younger quarterback, Samuel knows the comforts of what the system provides, whether or not he’s asked to be a running back.

The Patriots and 49ers connected on the all-time do-me-a-solid trade that sent Jimmy Garoppolo out west for pennies. Perhaps the relationship has remained friendly enough that Kyle Shanahan and John Lynch are willing to send a player back in the other direction. The Patriots popularized the wide receiver/running back blurring of lines with Cordarrelle Patterson a few years back, which might scare Samuel off. So, too, might the Patriots’ unproven combination of offensive coordinators in the post-Josh McDaniels era.

That said, they offer an attractive offensive setup featuring an ascending quarterback with top-10 accuracy. They have a solid running game independent of Samuel and create legal traffic better than any team in the NFL, save for the Rams. Samuel would also be playing in a defense-starved AFC East that, outside of Buffalo, gives him ample opportunities to hit any incentives that may be included in a new long-term contract. While it is decidedly un-Belichickian to trade for a top-of-the-market player and then sign him, Belichick’s philosophy has constantly evolved. We all thought he was free agent-averse, then he completely dominated a depressed market and stole half an offense for next to nothing.

The Ravens need to upgrade their receiving corps and have been trying—via trade, the draft and free agency—to diversify their weapon set beyond Mark Andrews. Rashod Bateman missed most of last year, so the full picture on the talented wideout has not yet come into focus.

Regardless, Samuel could enter the fold in Baltimore with little fear of becoming a primary rushing option. The Ravens are run dominant, and Samuel could capitalize on many of the second-chance opportunities Lamar Jackson provides by virtue of his backfield mobility. Similarly to San Francisco, he would play alongside a field-stretching complementary wideout who could draw top-end attention away from Samuel and provide him with clean, middle-of-the-field opportunities with which to run after the catch. While the Ravens are potentially bracing for a long-term Jackson contract extension, Samuel makes an attractive running mate for the time being.

The Colts have lost their footing a bit. Perpetually one step away from the Super Bowl in the Chris Ballard era, the roster is hampered in spots, including a 1A playmaker for Jonathan Taylor to pair with a consistently elite target for Matt Ryan. Ryan and Samuel were both steeped in the intricacies of Kyle Shanahan’s system and could find some common ground quickly.

The Colts do not have a first-round pick this year but possess some mid-round capital thanks to the Washington Commanders and would have their first-round pick next year, plus what is likely to be an additional second-round pick thanks to the conditions of the Carson Wentz trade. In Indianapolis, there is obviously no fear of Samuel turning into a full-time running back, he gets to play with a potential future Hall of Fame quarterback who could have a Carson Palmer-esque end to his career and works with one of the best play callers in the NFL.

If I were a 49ers team planning to contend for Super Bowls in the next two years, I would probably shy away from dealing Samuel to the Chiefs (or, really, to any of these teams save for the Jets). However, Kansas City is in the receiver market, they are absent a multi-tooled playmaker who can make appearances in and around the backfield and are in possession of the greatest recruiting weapon in the NFL: a quarterback who makes everyone better.

We have known Kansas City G.M. Brett Veach to be a fearless competitor when it comes to the trade market, and thus far this offseason, he’s henpecked around the best of the receiver market while letting Tyreek Hill go. Samuel is two years younger than Hill, which, as we saw in the case of the Tyrann Mathieu/Justin Reid swap, could more palatably fit into their contractual guardrails.

The Jaguars are harmless (for now) from a trade perspective, which could make the process easier for Kyle Shanahan and John Lynch. Samuel would not be part of a contending team until the 49ers had some kind of adequate replacement. They wouldn’t have to hear about getting owned on the deal for years to come.

For Samuel, he could arrive in Jacksonville with the power to dictate his offensive terms, and he’d pair with an ascending QB talent. The Jaguars have prospects at running back already, which would prevent any temptation to slide him over barring some kind of injury rash. The Jaguars are also stockpiled with cap space, have already invested heavily at the position and are looking to stabilize quickly.

Obviously, the Eagles, Saints, Falcons, Packers and Bears all need wide receivers but are in the 49ers’ conference and the preference would be to deal away from the NFC. The Texans need receiving help, but Samuel would probably run away from that situation faster than he would an ill-suited coverage linebacker. While I might consider dealing to the Bears or the Falcons, understanding, from a 49ers perspective, that the picks would still be relatively high for the next few years (especially in Atlanta as they prepare to break in a quarterback), shipping him off to the AFC feels safer and ultimately less problematic from an optical standpoint. The Browns need receiving help but are stripped of capital and cap space thanks to the Deshaun Watson trade. The Bills have their original first-round pick and a brilliant, aggressive GM, but if I were the 49ers, I would be terrified of dealing him to a Josh Allen-led team that would utilize Samuel brilliantly and always win enough games to make any future picks dip in value since they would be late-rounders.