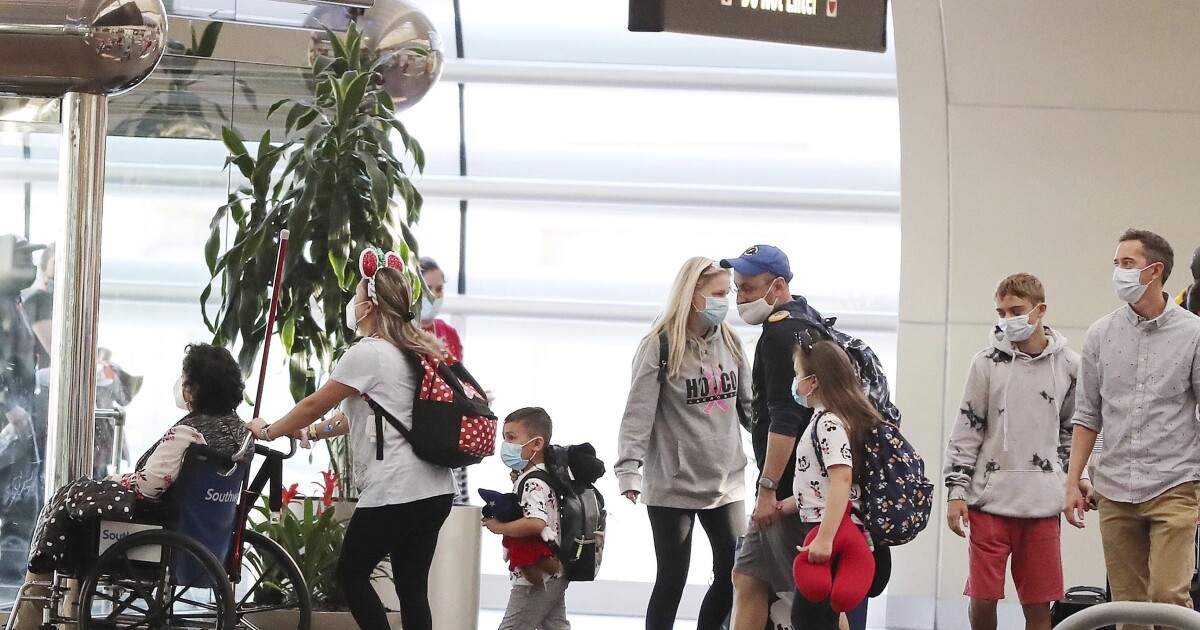 The latest COVID-19 variant is upending holiday plans for tens of thousands of travelers, but it didn’t do much damage to holiday shopping.

But throughout November and December, shoppers shrugged off the Omicron variant and holiday sales rose at the fastest pace in 17 years.

Omicron is likely to slow the economy’s unexpectedly strong rebound from last year’s coronavirus recession, disrupting travel and probably discouraging some consumers from venturing out to shops, restaurants and bars. The variant could also add more heat to already simmering inflation by forcing shutdowns of factories and ports, delaying shipments and driving up prices.

“A full reopening of the U.S. economy will be delayed yet again,” said Robin Brooks, chief economist at the Institute of International Finance, a trade group of financial firms.

But it’s not yet clear how deep the hurt will go or how long it will last.

For now, the variant is playing havoc with travel. More than 1,000 flights entering, leaving or flying within the U.S. were called off, according to the flight-tracking website FlightAware. That figure was up from nearly 1,000 on Saturday. About 130 flights were already canceled for Monday.

Delta, United, American and JetBlue have blamed the Omicron variant of the coronavirus for staffing shortages that forced cancellations.

“This was unexpected,” United spokesperson Maddie King said of Omicron’s effect on staffing.

Globally, airlines had scrapped more than 2,700 flights as of Sunday evening, down from more than 2,800 from the day before, FlightAware’s data showed. The site does not say why flights are canceled.

JetBlue scrapped 11% of its flights Sunday. Delta canceled 5% and United canceled 4%, according to FlightAware. The three airlines canceled more than 10% of their scheduled flights on Saturday.

Mason Herlocker waited Sunday at Newark Liberty International Airport in New Jersey to pick up his girlfriend, who was coming in from Paris. Her flight was delayed for four hours.

It took her five hours to get a coronavirus test the day before to enter the U.S. She’s visiting for three weeks, and Herlocker said he fears that she will get stuck here if she doesn’t have a negative test result before trying to return home to France.

Worried about his parents getting sick, Herlocker recently got a booster shot and encouraged others to get theirs too. He said he doesn’t believe an end to the pandemic is in sight.

“I’m of the opinion that this is the new normal,” Herlocker said. “I don’t foresee [the virus] going away any time soon.”

Aneesh Abhyankar flew in from Atlanta on Sunday and was waiting for a flight to India.

Neither of his flights was delayed or canceled, but he said news of the Omicron variant encouraged him to push up his travels to ensure he could get to his destination. He said face masks and vaccines are likely to become ingrained in everyday life for the foreseeable future.

“I don’t think we have much to worry about if we take all the precautions, and I think we will be entering a situation where we just live with” the virus, he said.

The results, which covered Nov. 1 through Dec. 24, were fueled by purchases of clothing and jewelry. Holiday sales were up 10.7% compared with the pre-pandemic 2019 holiday period.

After Omicron hit, some consumers shifted their spending to e-commerce, but sales stayed strong.

“I feel really good about how the season played out,’’ said Steve Sadove, senior advisor to Mastercard and former chief executive of Saks Inc. “When people feel a little bit uncomfortable, you’ll see a little bit of a pickup in online and a little bit of a slowdown in store performance.”

Sadove said consumers are “learning to live” with what COVID-19 throws at them.

Also Sunday, the nation’s top infectious-disease doctor acknowledged that he was frustrated with the limited supply of coronavirus tests.

Demand for tests has risen amid the surge fueled by the Omicron variant. “We’ve obviously got to do better,” Dr. Anthony Fauci said in an interview that aired Sunday on ABC’s “This Week.”

“I think things will improve greatly as we get into January, but that doesn’t help us today and tomorrow,” Fauci said.

Fauci said he was pleased with evidence that Omicron causes less severe illness for most people. But he warned against complacency because the rapid spread of the disease could “override a real diminution in severity” because so many more people could get infected.

There are still many questions about how bad the Omicron surge will be in the U.S., Johns Hopkins infectious-disease specialist Dr. Amesh Adalja said Sunday.

“There are multiple signals showing decreased severity. But the problem is, we have many high-risk individuals that are not vaccinated in some parts of the country. And there are hospitals in those regions that already are dealing with a lot of Delta patients,” Adalja said.

In Europe, France recorded more than 100,000 virus infections in a single day for the first time in the pandemic. COVID-19 hospitalizations have doubled over the last month as Omicron complicates the French government’s efforts to stave off a new lockdown.

More than 1 in 100 people in the Paris region have tested positive in the last week, according to the regional health service. Most new infections are linked to Omicron, which government experts predict will be dominant in France in the coming days. Omicron is already dominant in Britain.

President Emmanuel Macron’s government planned emergency meetings for Monday to discuss the next steps. Some scientists and educators have urged delaying the post-holiday return to school or suggested reimposing a curfew.