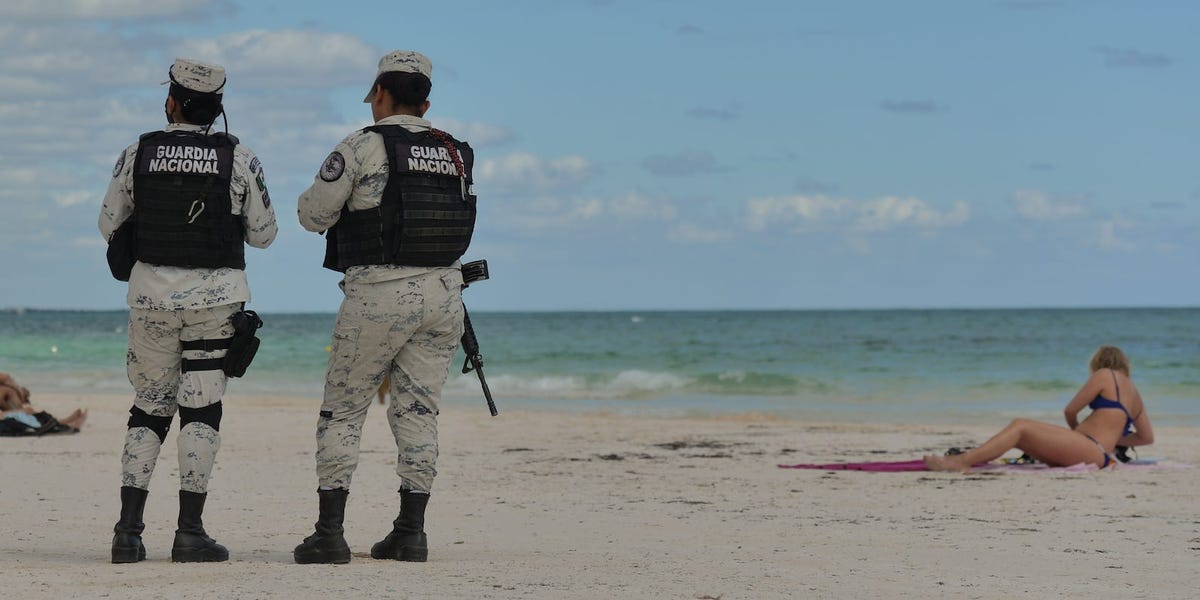 At the end of October, an attack inside a bar in the popular city of Tulum killed two foreign tourists, including US-based travel influencer Anjali Ryot.

During the first days of November, tourists visiting Puerto Morelos, south of Cancun, were locked down in their hotels after gunmen opened fire on a beach and pursued a target into a nearby resort. The shooting left two people dead.

On the morning of December 7, three men riding ski-jets opened fire on a group of people at Playa Langosta beach, in the tourist hotspot of Cancun, according to news reports. No one was injured or killed, but another attack in only a few weeks spiked anxiety among tourists.

Tulum alone saw 65 homicides between January and September, an 80.5% increase compared to the same period last year, when just 36 homicides took place, according to statistics from Mexico’s national system of public security.

Mexican officials said the recent spike in violence is a consequence of a “turf war” among a dozen local gangs looking to control the street drug-dealing business.

Oscar Montes de Oca, the state prosecutor in Quintana Roo — where Cancún and Tulum are located — said “about 10 groups of drug dealers” are fighting each other, but the reality could be more complex.

Quintana Roo very recently had local elections in its 11 municipalities, including for mayor and most police chiefs. This could be a key factor in the uptick of armed attacks, according to Eduardo Guerrero, director of Lantia, a Mexican consulting agency specializing in criminal organizations and security analysis.

“Most gang leaders had agreements in place with the leaving administration, and with a new chief of police, new mayors, and city officials, they are fighting to be the ones breaking a permissive deal that allows them to operate their illegal businesses freely,” Guerrero told Insider.

Cartels, gangs, and the mafia

Currently there are six gangs affiliated with major Mexican drug cartels operating in the region. The main criminal activities for these gangs are drug dealing, trafficking, extortion, human trafficking, and money laundering, according to a recent report by Lantia.

“These gangs are fighting mostly for the beach area, where they want to operate freely offering all sorts of drugs and businesses to tourists. Another hotspot for them is the main streets inside the cities, clubs, and casinos,” Guerrero said.

The gangs described in the report are “Los Pelones,” which broke away from the Gulf Cartel and is responsible for the most recent attacks in Tulum and Puerto Morelos.

The gangs “La Barredora” and “Los Compich” are fighting against Los Pelones for Cancun, Tulum, and Puerto Morelos specifically. La Barredora is especially invested in generating business ties with local authorities and officials; “La Gente de Aquiles,” a group belonging to “Los Árzate,” with strong ties to the Sinaloa Cartel and responsible for most of the street drug dealing.

“El Cártel de Cancún,” which operates as a branch of the Sinaloa Cartel, is mostly responsible for the area of Benito Juarez and Isla Mujeres.

On top of these gangs, the Jalisco New Generation Cartel also has a strong presence through alliances with smaller local gangs that once worked under the Gulf Cartel and Los Zetas, according to the report.

“This could only explain a part of what is going in Quintana Roo recently,” Guerrero said. “Another big part is the presence of Romanian and Russian mafia operating mostly on money laundering and sex trafficking.”

In May, the Mexican government captured Romanian businessman Florian Tudor in Quintana Roo. Tudor is accused of being the leader of a Romanian mafia operating in several tourist hotspots in Mexico.

“Florian T. was captured by Mexico’s General Attorney Office complying with an extradition request by Romanian government for allegedly being involved in organized crime, extortion and homicide” the Attorney General’s Attorney Office said in a press release.

Adrian Enachescu, Tudor’s step-brother, opened a Delaware-based business with offices in New York and San Francisco, which were allegedly used to transfer money from illegal operations in Romania to Mexico, according to an investigation by the Organized Crime and Corruption Reporting Project.

The organization Tudor is accused of running, called the Riviera Maya gang, was unique among European criminal groups in that Mexico was its base of operations.

“Florian built a network of politicians, businessman, and criminals for more than 10 years that allowed him to operate massively in Quintana Roo and Baja California Sur,” Guerrero said.

According to Guerrero, Tudor was so high up he even met with current Mexico’s top police chief, Rosa Icela Rodriguez, by request of President Andres Manuel Lopez Obrador.

Although he is in jail and faces several years behind bars, the operation he is accused of running is still alive for the most part in Quintana Roo.

“Its the same as with Mexican cartels. They captured the boss, but the organization is still operating under new leadership,” said Guerrero.

Last week, Mexico deployed 1,500 National Guard troops to Quintana Roo, basing them in Tulum, to patrol tourist beaches. As with previous deployments, the soldiers in full gear among the tourists enjoying the beaches has received international attention.