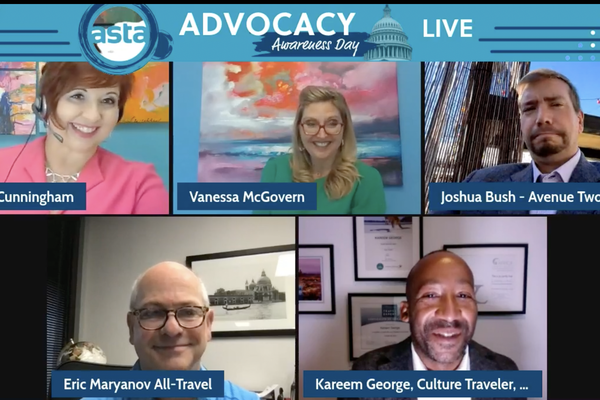 The second annual ASTA Advocacy Awareness Day kicked off on Facebook, October 19, 2021, with Gifted Travel Network’s Vanessa McGovern and Shannon Cunningham welcoming participants to the event, which took place on the association’s Facebook page with a series of live videos.

Advocacy Awareness Day featured live speakers and panelists, throughout the day who discussed the various causes ASTA was pushing in meetings with legislators on Capitol Hill as well as the importance member donations played in getting favorable laws passed that help rather than harm the industry.

There has never been a time that ASTA’s advocacy has been more important.

Executive vice president of advocacy for ASTA Eben Peck said: “It has been an incredibly difficult year-and-a-half for ASTA and its members. As we work to push forward the industry’s recovery, we wanted to highlight the incredible work our members have done in support of our advocacy efforts post-COVID and to let new and prospective members know how they can get involved.”

During the “ASTA Strong” presentation, Peck stressed the important role government has played in travel advisor businesses during the last year.

“The government has loomed so over your business over the past year and a half,” he said. “It’s really the difference between life and death in terms of your business.”

Peck went on to describe the tools ASTA has as a “three-legged stool.”

The first leg is direct lobbying on the part of ASTA staff and its two outside lobbying firms.
The second is grassroots lobbying with ASTA’s 17,000 members, “which is our real strength in every state and every congressional district,” he said.

The third is political engagement through ASTA PAC. “It’s the way we pool donations and influence the political process and make campaign contributions,” said Peck.

During the “Advisors Still Standing panel, McGovern and Cunningham spoke with Joshua Bush of Avenue Two Travel, Kareem George of Culture Traveler and Eric Maryanov of All-Travel. Each of them shared how the important work ASTA has done during the pandemic helped keep agencies afloat.

“We would not have traversed as far as we have in this pandemic without ASTAPAC and their advocacy efforts,” said Bush.

He credited ASTA with providing a place for advisors to go to find information on programs that were critical to their survival such as the PPP and for educating advisors on EIDL. He also pointed to ASTA’s ongoing efforts on ERTC.

“We have families and people that need to be taken care of and our industry is off by 85-90 percent,” said Bush. “To be able to have ASTA on the hill explaining to Congress what our situation is and how our cash flow works, which is completely different from so many industries, that is important. The ability to have sit-downs with Chuck Schumer’s office, that just shows the power of this network and of ASTA. We definitely at Avenue Two Travel wouldn’t be here today if it weren’t for these programs, and pasta stepping up to the plate on our behalf.”

George praised ASTA for its educational efforts around PPP and credited them with helping him specifically as an independent contractor.

“Because of ASTA and its advocacy efforts, I found out about and learned about PPP,” said George. “Everyone remembers how confusing all of these programs when they were first launched. It was really a nightmare to understand and to even know that I was eligible as an independent contractor to apply for PPP. If it wasn’t for the support from ASTA to do that my business wouldn’t be recovering as it is.”

“The importance of ASTA is that it is one unifying voice for the entire industry,” said Maryanov. “We are such a diverse group of people but nobody can do what ASTA does bringing us together as one voice in Washington to navigate what it takes to get around in Washington as well as to make our voices heard as to what our industry is and the needs of our industry. ASTA has been there long before all of this happened with Covid. I can’t imagine having gone through Covid without ASTA but boy did they rise to the occasion.”

Maryanov noted that ASTA brought awareness of the plight of travel advisors and the travel industry to the government and because they had set a foundation through its annual Legislative Day and due to its ongoing advocacy work over the years, people knew who they were, which is a huge plus.

“I don’t think any of us would be in business right now if ASTA hadn’t been there for all of us so the time is now for us to be there for ASTA,” said Maryanov, noting the importance financially giving to ASTAPAC.

Vicki Freed, Royal Caribbean’s senior vice president of sales, trade support and service, joined the group to discuss her experience with ASTA on Legislative Day where she along with travel advisors called on government officials and legislators to tell their stories.

“Telling our story is so important,” said Freed. “I have been a part of Legislative Day for six or seven years and I always find it so fascinating. It is important to meet with these officials because they don’t understand our business. This year, we really had to explain all of the challenges. None of them understood how travel advisors got paid. When we were able to explain that travel advisors don’t get paid until the final payment, [legislators] were like wait a minute, how do you survive?”

Freed explained the importance of being able to tell a story to legislators that really meant something to them. She also noted that the summer sailing season in Alaska was saved on Legislative Day. Everyone discussed it and that night it was voted on and it passed

“This shows you the power of your voice and the change that each and every one of us can make during Legislative Day,” said Freed.

ASTA president and CEO Zane Kerby addressed the ASTA Advocacy Awareness Day attendees during the event. Kerby noted that the sun is beginning to break through the clouds.

He pointed out the success that ASTA and sister associations in the UK and Canada had in successfully calling on the Biden Administration to open international borders. A week later, the administration announced that it would let vaccinated travelers travel into the U.S.

Kerby also talked about ASTA’s call with Senate Majority Leader Chuck Schumer in support of several bills that are moving through Congress. ASTA was able to keep travel advisors on the senator’s mind as he works with his colleagues to determine which groups get aid.

“Our call was incredibly successful,” said Kerby. “He was largely unaware of the challenges we face. Challenges exacerbated by the lag time of receiving commissions. He was empathetic and pledged to support. Senator Schumer’s staff have also been extremely supportive of ASTA staff in the intervening weeks.”

Kerby noted that those that gave to the cause gave because they believed in investing in the present and the future of the travel advisor community. That is the power and the importance of ASTA and what gives me confidence in our bright future.”

Travel advisors can help ASTA reach and beat the 2020 results of $30,000 raised and help raise more at ASTA.org/Donate.